Who should your first hire be? #FFE15 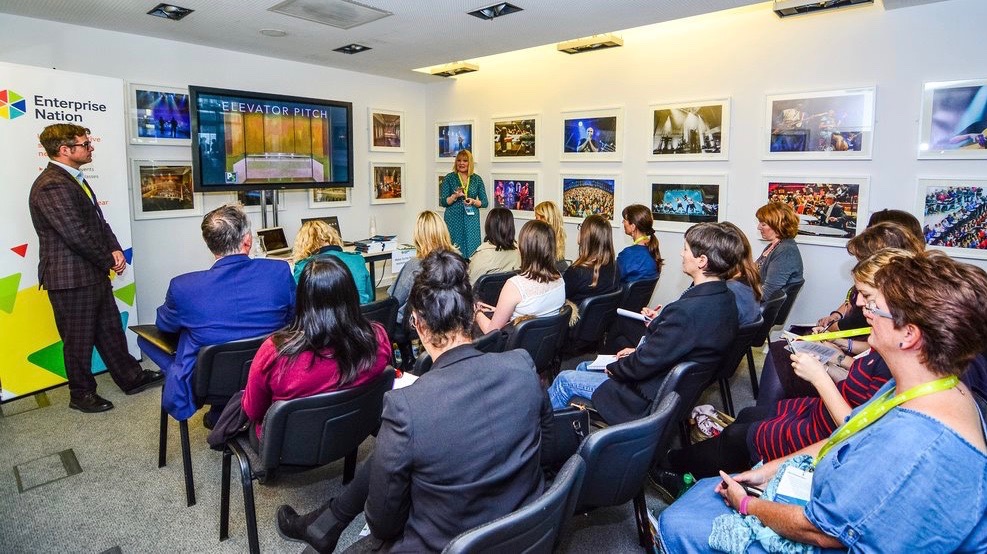 Even when attending an event (#FFE15) with a lanyard marked ’SPEAKER’ – it’s important to remember to keep your ears open: the whole point of live events is to share ideas and remember that nobody has all the information. PS Programmes’ Nadine Dereza and Ian Hawkins were invited to run their public speaking masterclass in Bristol this week, speaking at the Festival of Female Entrepreneurs 2015 – a truly inspiring event put on by Enterprise Nation and chaired superbly by Emma Jones in the city’s iconic Colston Hall where we learned definitively who the entrepreneur’s first hire should be if they want to take their business from the kitchen table to the boardroom.

But wait up a moment: do female entrepreneurs need their own conference? Is this a group of people who need a step up? What are the particular needs of women entrepreneurs?

We take all those clichés about how men and women are different with a well-researched pinch of salt. Multitasking? Doesn’t exist apparently. Think Maths is a ‘boys’ subject’? Culture not biology is responsible.

However tempting it may be to say that women are better at networking and growing businesses through their social groups, think of the male-dominated Freemasons and Rotary Clubs and you’ll see that ‘who you know’ has been a part of the business landscape since the year dot. Entrepreneurialism, then, is more about mindset than happening to be a man or a woman, and on the face of it, the idea that women might make ‘better’ entrepreneurs than men is as ridiculous as is the idea that men make better entrepreneurs than women.

Forbes has some eye-opening statistics from the US about the differences between male and female entrepreneurs with the headline being that men will tend to get into debt to start their businesses, while women tend to be more conservative and use their savings. Women’s businesses fail at a rate just 2% above men’s, but on average their start up capital is US$24,000 lower. Women therefore tend to start up businesses that may be more agile, but also more vulnerable to running out of cash, that either grow slowly or fail – but don’t tend to have a line of creditors at the door.

The female entrepreneur is a far from endangered species, so why the Festival? Put simply, the event was laying a foundation stone for a long-term building project. Tomorrow’s boards are made of today’s entrepreneurs, and this is why the Festival is such a vital event. This report from Deloitte shows that while we wring our hands over the lack of women in top jobs in this country (15.6% of board seats in the UK are held by women) even the ‘success stories’ of Scandinavia are far from perfect. Norway’s 36.7% of board seats held by women is still some way off a 50-50 split, and although Denmark is the country with the sixth-highest number of women on its boards, not one of the boards analysed in Denmark had a female chair.

Between the ’top jobs’ and the entrepreneurs are everyone else, with women who have both a career and a family sometimes described as ‘having it all’ – a more than slightly pejorative term, in which ‘all’ doesn’t presumably, include ‘sleep’.

But back to the question posed at the top of this blog: who should your first hire be, when you start a business? The answer was provided by fellow Festival speaker Julie Creffield, who made her blog ‘Too Fat To Run’ into a business and campaign to promote healthier living. You may have seen the #AnyGirlCan poster campaign, which show the few public images of normal-looking women looking happy without the need for a product or an unlikely-sounding face cream to put a smile on their faces.

Julie is a walking (or rather, running) inspiration for anyone who has tried to live a more active lifestyle in the face of modern life which has us all spending too much time occupying our brains while our bodies remain sedentary, and her style is to mix her own experience with research and straight, practical advice. And so although her ‘official’ subject is health, happiness and obesity, we felt that one of the most useful takeaways from Julie’s speech was the advice to hire a cleaner as soon as the fledgling business can support one.

The line got a laugh from the packed Colston Hall, but it concealed a deeper truth: when a business starts up it’s essential to keep on top of it. Anyone who’s been self-employed will know that the temptation to do the cleaning rather than the invoicing can be strong. How many entrepreneurs have ended the day with a sparkling kitchen while their bills go unpaid? How many kitchen table businesses have folded because that table needed clearing before the kids got home from school?

When you’re self-employed, the assumption is that you have the opportunity to do the housework, even if your business has needs. The words in ‘home office’ are in that order for a reason. If your start-up is a low-budget, spare room affair, the perception is that it matters less if it fails. And that selling-through-your-friends hobby that turned a small profit and fitted in between baby feeds isn’t quite profitable enough now the babies have grown up. Running a home and running a business are comparable, and you have to know which to prioritise and when to do it. There’s a compelling case, if you want your business to succeed, to outsource your laundry at the first opportunity.

Whether you are male or female, your first hire ought to be a cleaner: after all, he or she may be an entrepreneur too. And you never know who else they clean for…