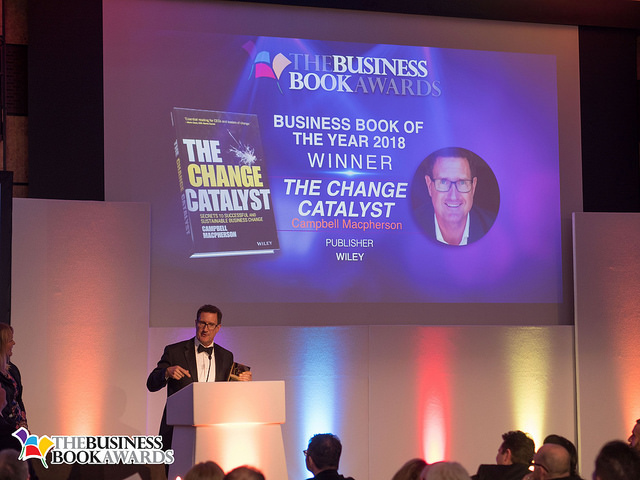 At last week’s inaugural Business Book Awards ceremony in Central London, Lucy McCarraher said in her welcoming speech that she had set up the awards in partnership with Thinkfest, in response to changes in the business book market: ‘Business books themselves have increased in quality as well as quantity. Overall, business authors have become more sophisticated in the way they write really good and valuable books; they have learned better how to engage their readers and take them on an enlightening journey. And these smart books have in turn stoked a real hunger in their readers. In conversations or on social media, business people are always sharing and on the lookout for the latest information and insights that peers and mentors have put into print.’ And the demand for these Awards was clearly there, they attracted the best in book publishing with 36 authors shortlisted from 150 entries initially received, all from a variety of publishers. In fact, seventeen different publishers made it through to the shortlist, with entries ranging from independent publishers such as The Authority Guide, through to household names such as Wiley, Penguin Random House, Kogan Page and Bloomsbury.

I relished the opportunity to be one of three judges on the ‘Leading the team’ panel, along with Peter McKay and Martin Norbury: Peter is Chief Executive of The Publishing Training Centre, and Martin is an award-winning entrepreneur and author of ‘I Don’t Work Fridays.’  (Presumably, our Friday night award ceremony doesn’t count as ‘work’.)

After judging Campbell MacPherson’s ‘The Change Cataylst’ as the winner of the category, it turned out to be an excellent choice as it went on to win ‘Book of the Year’ overall. And I got the opportunity to share my judging comments on his book with the audience…’Campbell’s generosity of spirit and many years of experience, shone through and he not only thoroughly explained why change fails but also analysed practical solutions for change, as well as how to lead a team to get the desired result so change can be implemented successfully. The Change Catalyst’ is very well-written, insightful with spot on anecdotes to help us transform for the better.’ The category winners were:

Startup InspirationIt Takes a Tribe by Will Dean (Portfolio, Penguin Random House) – whose thank you speech referenced his experience as co-founder and CEO of Tough Mudder.

Selling the Dream
Strategic Tendering for Professional Services by Matthew Fuller and Tim Nightingale (Kogan Page) – clearly an excellent read, as the judges won business from following tips in the book.

Leading the Team
The Change Catalyst by Campbell Macpherson (Wiley) (Also overall winner). Campbell’s Book was the result of ‘a presentation from Bain & Co that said “88% of change initiatives, strategies and merges and acquisitions fail” – and I thought “goodness me, there’s the hook for the book.”

Embracing Change
Futureproof by Minter Dial and Caleb Storkey (Pearson) – collecting the award, Caleb pointed to the future as it would unfold for his infant daughter, whom he is home schooling (when Alexa has the answers, he argued, facts become secondary to how you interpret the world).

Self-Development
The Leader’s Guide to Presenting by Tom Bird and Jeremy Cassell (Pearson) – the need to speak well in front of audiences and in the media remains as relevant as ever.

So what is the benefit of having an award ceremony?

You had to keep reminding yourself that this was the first ever Business Book Awards, with the event being a huge success – hats off to ThinkFest who got it right first time. I have witnessed many events which have started in a broom cupboard and can take years to gain traction, not this one.

But there’s more to an awards ceremony than getting the champagne chilled and booking a Four Poofs and a Piano (though that’s a great start). Credibility really is the name of the game. There is no point in running an awards ceremony if people don’t think it’s a fair contest. The business book awards were run properly in this regard from the very beginning. With the high calibre of entries, expertly guided by Head Judge, Alison Jones, all the judging panels took the task very seriously. As you might expect from this kind of contest, my fellow judges had fantastic credentials from the world of publishing, as authors in their own right, and as business people: it’s easy enough to write a book, rather more difficult to write one that’s going to be of use to someone whose livelihood may depend upon it. For every judge turning the pages in the hope of discovering a beautifully turned phrase, there was an entrepreneur who had learned the hard way and was looking for solid content. And many of the judges, including Martin Norbury, have seen the industry both from a business perspective, and as an author.

There was a real sense of being among industry movers and shakers in the judging room, and if anyone felt they weren’t up to the task of choosing a winner, the wisdom of this highly qualified crowd was sure to prevail.

So, it wasn’t easy – and I found myself reading through a stack of books whilst supposedly on holiday. But as Noel Coward so memorably said, ‘work is more fun than fun,’ and this was time well donated to a worthwhile endeavour.

What are the rewards for organiser of getting this event right?

Well, the usual story with industry awards is very simple: publicity. Once you have created legitimate awards, the winners will go off and publicise your brand as being the arbiters of excellence. In this world of reputation management, being seen as a thought leader is more important now than ever it was. And indeed, if you can set your organisation up as providing a benchmark of quality, people will come to you because they know that you are trustworthy and reliable.

Lucy’s aim with this event was not, however, to set herself up as an authority, so much as it was to shine a spotlight on this growing area of the publishing industry. Indeed, as the awards website says, ‘We hope that the Awards will allow short-listed and winning authors to publicise and sell more books; that the event will instil aspiration in entrants and pride in winners; and that the ongoing process will inspire other budding writers to come forward and publish their work.’

Lucy really is about encouraging people to tell their story. There was one thing that shone through at the event on Friday night, it was that so many people wanted to impart the knowledge to others. Established writers were keen to help first timers. Publishers were looking for new talent. The authors themselves wanted to pass on their business knowledge and help other people set up and run successful companies. And at the heart of it all, Lucy seem to be the ‘queenpin’ (new word alert!) that held everything together: this vast network of support, encouragement and mentoring.

The Awards will go on from strength to strength, and we may have had a 50/50 gender balance amongst the judging panel, but next year I hope to see more women write, publish, enter and win. Special mention to Eve Poole for her brilliant ‘Leadersmithing’ book entry which received a Highly Commended Certificate, narrowly missing out on the top spot in the Lead the Team category, which as we know was awarded to ‘The Change Catalyst’!

All the judges gave up their time for the awards, and by co- hosting the event too with Simon Da Cintra, I had one of the best seats in the house! Entries for 2019 open in July 2018, start writing now…(special thanks to @Social_Frames for great pics).