Dealing with a crisis – one size doesn’t fit all 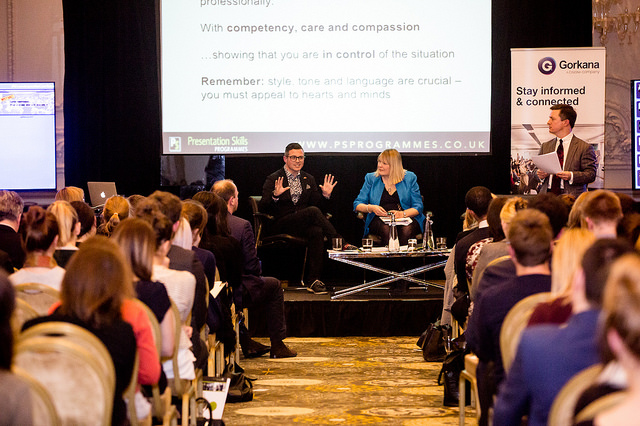 Nadine and Ian took a PS Programmes team trip to the Langham Hotel in London on Tuesday 9 February to deliver a crisis media management masterclass exclusively to some of the UK’s most senior PR industry figures.

Hosted in partnership by Eventopedia, the event industry search engine and reviews site, and Gorkana, a media intelligence company, the masterclass was attended by more than 200 communications specialists from a diverse range of businesses and organisations.

One of the key learning points that we touched upon in the session, was that one standard approach to dealing with a crisis certainly does not fit all. We talked about a number of real-life crises that have dominated the headlines recently, and discussed the ways in which each of the organisations involved handled the media when crisis hit. The examples we used illustrate how different approaches can succeed or fail depending on the situation and demonstrate why some strategies work while others don’t (in our opinion).

DISCLAIMER: this blog is not about stating the rights and wrongs of different circumstances that lead to the need for crisis media management strategies to be put into action. We are conscious that one of the examples we discussed during our workshop involved a fatality, and our role, as crisis media management coaches, is to examine the way that organisations respond when a crisis hits, not to apportion blame.

One of examples we highlighted was the Volkswagen emissions scandal, of September 2015. Namely the way that Volkswagen Group of America’s President and CEO, Michael Horn, revealed in a YouTube broadcast that the company had been “dishonest”.

This is a good example of getting it wrong: but not getting it wrong in an overt way – more a failure to strike the right chord. Sometimes details matter, and this was certainly the case for Volkswagen.

Horn delivered his “we totally screwed up” confession live on stage to a packed auditorium, and his poor attempt at a joke fell completely flat. He paced the stage, his hands were busy gesticulating and, despite his words, the overall impression you are left with is that Horn either didn’t take the time to think things through or that he completely misunderstood how serious the situation was.

We can imagine a well-meaning advisor suggesting to Horn, before he took to the stage, that he could lose the tie, take a relaxed manner and try to be himself. All potentially good tips – but not appropriate under the circumstances.

This was clearly a staged event and a few changes could have made Mr. Horn’s statement more powerful.

The head mic he wore gave the impression of someone who was free to move around, but this actually took away a lot of his gravitas. A lectern would have helped ground him and given him more of an air of the official ‘voice of the company’.

This ‘non-official’ feeling intensified as Horn continued to speak and the absence of Volkswagen branding in the video also served to strip away the company’s credibility further.

And the sartorial question: should Horn have worn a tie? The open neck suggests a casualness that doesn’t feel appropriate for a serious business statement. It suggests a lack of attention to detail.

And finally, obviously, drop the joke.

The over all effect was not of the representative of Volkswagen making an important statement – Horn instead looked as though he had wandered in after a business lunch and was simply expressing his opinion on the situation. For what was a staged event, there was a lot of looseness about what was actually happening. By the time we reached the final sentence, ‘this behaviour is inconsistent with our core values,’ the words rang hollow enough to make viewers question whether deceiving the public and cooking the figures might in fact be the company’s true values (as opposed to the values given on their website).

In stark contrast to Volkswagen’s style and approach, is CarFest 2015 which saw television personality Chris Evans speaking live on Sky News informing the press that there had been a fatal air accident at the show.

Evans is a seasoned broadcaster and presenter, but slickness and professionalism would have struck the complete wrong note here. He was too close to events to avoid being a part of them. He is also someone who people at home feel that they ‘know’ personally – so in Evans’ reaction we’re immediately inclined to think of him as ‘one of us’ and in this scenario we experienced the events through his eyes and honest reactions.

Evans looked disheveled, upset and unprepared. However, he succeeded in getting a lot of information out, accurately, in what must have been a very pressured and distressing time.

His faltering style is exactly what you would expect from someone who really cares for the event and has empathy for the victim’s family. He let the facts stand for themselves and communicates his feelings and emotions powerfully, and non-verbally.

Even though he was speaking on behalf of CarFest, it’s difficult for Chris Evans to represent anyone other than himself, and as the media face of CarFest, he is had a very difficult balance to strike.

Of course, this is a very different crisis media event to the Volkswagen example. Chris Evans was appearing on Sky News informing viewers what was happening as the crisis was unfolding. We felt an immediacy about the information being given – it wasn’t dressed up in any way. It felt honest and authentic.

One of the most interesting pieces of footage we looked at – and again, this is an exercise in how the media works, not an attempt to downplay the seriousness of the situation itself – is news presenter Kay Burley’s Sky News interview with Merlin CEO Nick Varney following the Smiler rollercoaster crash at Alton Towers theme park.

We expect interviewers to hold powerful people accountable, but this was one of the very rare occasions when public sympathy actually turned against the news presenter. Varney was questioned at length, interrupted, and criticised by Burley who used language that many viewers felt crossed a line.

Reviewing the footage, it is clear that Varney did a lot right. Most important, he stayed calm under pressure from the interviewer. He didn’t rise to the bait, and although we generally advise against saying ‘no comment’, Varney gave a clear and understandable reason as to why he would not be discussing aspects of the victims’ medical conditions. Burley came across as someone trying to claim a scalp. Because Varney presented himself as sincere and reasonable, expressing concern for the victims in a professional way (without being cold) Burley was perceived to be grandstanding and only serving to make the situation worse. The result? 33,000 people signed an online petition calling for Burley to be sacked.

The main thing to learn from this is that if you get the tone and the words right – and we don’t mean in a glib or superficial way, because viewers or listeners will detect insincerity – you can get your message across in a way that ensures your position is understood.

Every organisation needs to know what to do in the event of a crisis. Our PS Programmes workshop underlined that even big companies like Volkswagen and BP can get it seriously wrong.

Whatever the size of your organisation, your media response to a crisis needs to be genuine – there is no substitute for having your heart in the right place during events that impact on the well being of others.

Crises are undesirable but often also unavoidable. We always maintain, however, that they are an opportunity to demonstrate to stakeholders, customers and the broader public that the core values of an organisation are as important in a crisis as they are when everything goes to plan.

The majority of our audience of communications specialists at the masterclass said that they have a crisis media management plan in place, although not many had reviewed it in the last six months. Could your organisation benefit from training in this area?

PS Programmes runs bespoke media and crisis media management training programmes for public relations and communication companies, as well as working directly with businesses and organisations of all shapes and sizes, in the UK and internationally.

We would like to extend a special thanks to Eventopedia and Gorkana for providing PS Programmes with the opportunity to share our knowledge and meet with the best of the best in the PR and Communications industry.