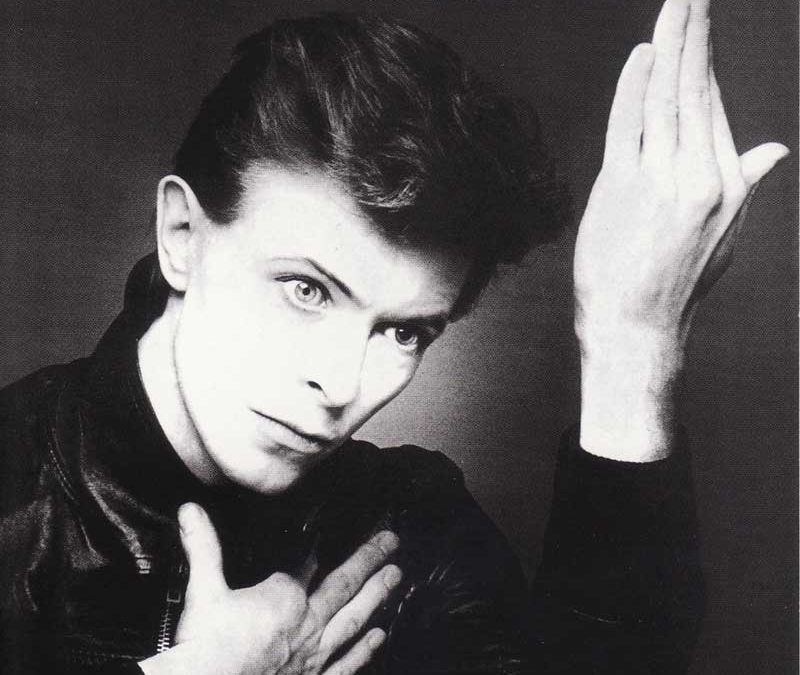 David Bowie wore many outfits, but the one that never really fitted was nostalgia. Posted on social media timelines following the news of Bowie’s passing were endless YouTube videos from a long career, including a recent performance of Heroes that (leaving aside that voice perched right on the edge of breaking) sounded nothing like the original. Despite being the inspiration not just for other performers but entire sub-genres of popular music, Bowie never took the easy road of copying himself. Reinvention rather than self-parody was the preferred option.

Besides nostalgia, the other thing that David Bowie didn’t do was dwindle. His penultimate album, The Next Day defiantly subverted his legacy from the cover artwork (the Heroes cover with that title crossed out, and the new title on a white square covering the main image) onwards. And his final album, Blackstar, released just two days before he died, has been described variously as ‘extreme’ (Independent), ‘intriguing’ (Q) and according to the New York Times ‘refusing to cater to the expectations of radio stations or fans’. Whilst the music critics were glowing, his first wife Angie was appearing on C5’s Celebrity Big Brother, and so the span of his influence reached everywhere, from the chin-rubbing intelligentsia to tabloid telly and plenty in between. Greg Proops’s tribute to Bowie, released on the day that he died was not an obituary; it was recorded a few days before and was a celebration of an artist very much alive.

If you remember where you were when you heard that David Bowie had died, you’re likely to remember where you were when you found out who he was, and these memories have been the starting point of conversations since the news broke. And what a reach he had: ‘When Ziggy Stardust arrived in Hong Kong in 1972, it could not have caused more fuss if David Bowie had actually arrived from Mars,’ remembers one friend. ‘Hong Kong was colonial, old-fashioned, buttoned-down and culturally stuck in the 1930s, so Ziggy Stardust was like a stick of TNT (explosive) under the establishment.’

The truth about Swinging London of the 1960s is that it was a bit of a London fad: the sexual revolution and the hippie movement were obviously the driving forces of King’s Road and Carnaby Street. But as you left the city behind, suburbia’s grip tightened and although ‘Sgt. Pepper’ did brisk business, ‘Strawberry Fields’ was famously kept off the top of the charts by housewives’ choice Englebert Humperdinck. England’s suburbs may have been less oppressive than Hong Kong, in both cases the distance was as much cultural as geographical. It all felt ‘other’ and far, far away. David Bowie was arguably the artist that popped the London bubble and had brothers and sisters bonding over the mascara out in the real world.

Each album provided more than a soundtrack to our lives, it also gave us a ‘look’ and an attitude. And the attitude was everything. The attitude celebrated all that was quirky and anti-establishment and appealed directly to the hunger for being quirky and anti-establishment that many felt. The world was changing, and we weren’t going to be left behind. Though parents and teachers may have reserved a special heavy look for anyone who was deemed too ‘far out’, those of us who didn’t feel quite ready to be adults and get jobs and dress just like our parents opted instead to spend some time spinning the discs of this unworldly being who personified every single thing that the grown-ups disapproved of.

Walking among the exhibits of ‘David Bowie is’ at the V&A in 2013, I felt a heady rush of memories: Bowie’s music was telling us that we were on the edge of a world of possibility and could be anything we wanted to be. We were all the lucky ones: with a box of eye shadow and a creative approach to our clothes, we could travel to outer space. Bowie may have presented a slick product and a crafted image, but there is no getting away from the rough edges of the home-made outfits that we phoenixed from old clothes or the slightly artless reconstructions of the album covers we attempted in our bedrooms. As we sat in front of the folding dressing table mirror and sang into a hairbrush, he felt like he belonged to us, not the other way round. With mainstream culture today telling young people that their ultimate goal should be to become consumers of whatever the mainstream produces, it felt like Bowie was holding a door open into an exciting world of self-expression. Television talent shows seem to be an advert for the astonishing odds stacked against your success, and high street fashion homogenises self-expression for the mass market. Bowie was saying that you should follow wherever your compass pointed – even if it was in the opposite direction to everyone else. Pleasing others or being yourself is the choice.

You didn’t have to be a teenager in the 1970s to be influenced by Bowie. The early ‘70s may represent the bright heat of breakthrough, but even in the 1990s, Bowie was handed a project that introduced him to a new generation of fans because Bowie did the soundtrack to the TV drama The Buddha of Suburbia.

One such new fan was my co-author Ian Hawkins, who was astonished to find many of these songs already existed in the house in his big brother’s record collection. He told me he remembered listening to Hunky Dory and saying to his brother “Why don’t you play this all the time?” Twenty years after Ziggy Stardust, David Bowie’s mix of music, style and attitude was still powerful stuff on first experience.

So although we say goodbye to David Bowie, we remember that good music doesn’t really go away. Two short months ago, a previously unheard recording of Under Pressure was doing the rounds: with all the music stripped out, Bowie and Freddie Mercury’s vocals stand alone and you can hear just how brilliant and original they both are. It isn’t an obvious choice to leave you with, because obvious choices are elsewhere – if not everywhere else. What it does do is show that inside the costume, behind the makeup and beneath the production we have said a premature goodbye to a singular talent.

David Bowie was the soundtrack to not only my youth but my brother Nick’s youth as well, and Nick has to take credit for introducing him to me and over a tearful exchange on hearing the sad news, Nick summed it up beautifully…‘Bowie was a wonderful trail blazing figure that inspired us to be creative and be ourselves’.