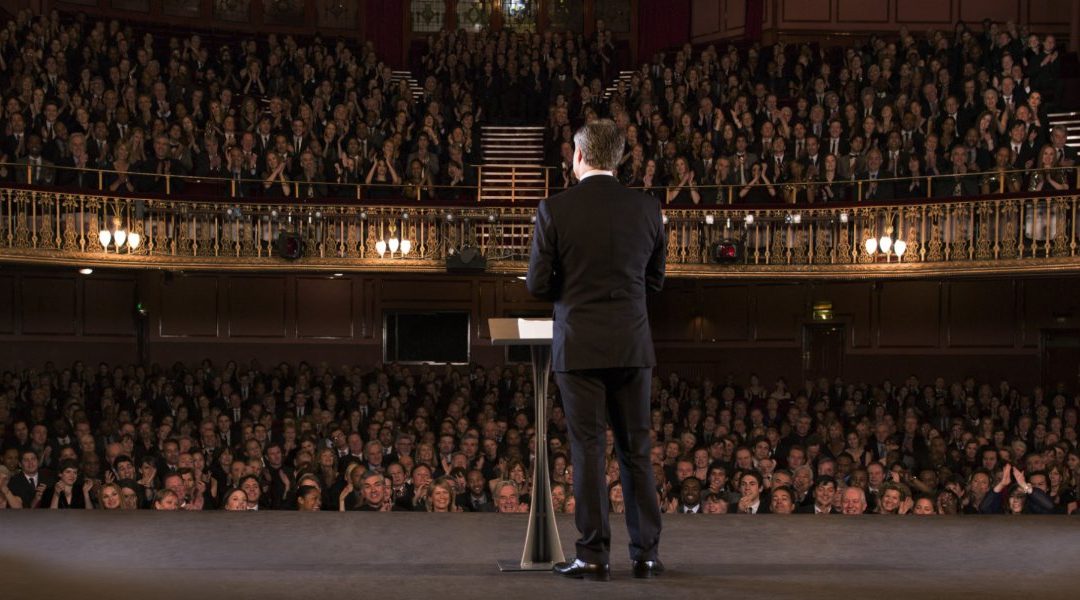 It has been over a year since our book, ‘Insider Secrets of Public Speaking’ hit the shelves, and in that time we’ve delivered dozens of workshops, training programmes, speeches and coaching sessions off the back of it. In the run up to Christmas, we thought it would be helpful to look back at the core advice we gave, and examine a few examples of how we’ve put it into use in 2015. Learning, after all, doesn’t just stop on the publisher’s deadline.

Only last week, an esoteric book on the art of performance was pressed into our hands, written by a very well-known entertainer currently preparing for a season in London’s West End. Careful reading of the book (currently available from Amazon at £139.99) revels that our three Golden Principles of public speaking are echoed in its pages, though they are directed at a specific sector of professional entertainers, and aren’t put in quite such explicit terms as you’ll find in our more modestly-priced volume.

We are resisting the urge to make ‘Insider Secrets’ ten times more expensive and much harder to get hold of.

So let’s start by looking at one of our three golden principles of public speaking – THE AUDIENCE. What have we been talking about with our clients this year when its comes to thinking about the audience?

Putting the audience first is the best way to not only tackle nerves, but also to make a start on deciding what to actually do in a meeting or on stage.

Nerves, the perennial issue that we face with coaching clients, are a self-fulfilling prophecy: you don’t want to look nervous, and so you focus on hiding it – which only makes it more distracting and unmanageable. Even speakers who don’t look nervous can worry about it. Recently, a speaker finished a brilliant and confident presentation, and told us immediately afterwards she felt nervous throughout. What could she do about her nerves? We counselled that if the 200 audience members (including a couple of professional speaker coaches) couldn’t spot her anxiety, perhaps it wasn’t a big problem after all. Getting the problem into perspective and changing the focus was, we felt, more useful than spending a long time tackling something that wasn’t, at the end of the day, making any difference to the speaker’s performance – except in her own head.

Another speaker really was having trouble controlling his nerves, and the audience knew it. From the back of the room, you could see that this was a nervous person, and so our approach was rather different. Rather than trying to fool the audience (which is a guaranteed way of neither relaxing nor connecting with the people in the room), we suggested that he told an anecdote about a situation in which he felt uncomfortable. The speaker’s next speech opened with a story about clashing cultures, and his genuine nervousness was interpreted by the audience as a neat bit of acting embarrassed by the faux pas he was describing. The speaker’s evident discomfort added to the storytelling, the audience was won over and on his side, and the speaker relaxed into the rest of his speech.

We often see speakers tackling their nerves head-on and telling the audience that they feel awkward in the spotlight – which at least avoids the problem of trying to hide their growing anxiety. Many people do this and although it isn’t always a bad approach to take, if you’re putting yourself out there as an expert or a leader, it takes away some of your authority which can be difficult to win back, so it isn’t something we recommend.

This focus on the audience’s reaction is a reality check for all of us who speak in public. Many performers would say that they couldn’t enjoy themselves if the audience didn’t have a good time too – so take care of the audience before you worry about yourself.

This leads us into content – another big worry for speakers. What are you actually going to talk about?

We took a call from a writer who had been asked to speak after dinner. Our questions…Who was at the dinner? Why were they there? Why had she been booked? They were all answered with ‘I don’t know.’ Our next conversation on the following day was a lot more constructive: she’d been in touch with the organisers and found out there were 80 local business owners, it was their regular networking event, and the last speaker had been a local politician who had been partisan and dull, so they wanted someone to be provocative but not divisive. Immediately we were able to start thinking about what the audience wanted: a few interesting anecdotes (interesting, not necessarily funny), which would spur some conversation, something about customer experience which the writer had some expertise in, and above all, getting off stage before everyone found their phones more interesting than the speech. Our speaker threw in the idea for presenting some jokey made-up awards to people she knew would be in the audience and up for a laugh – and her ‘after dinner’ turn virtually wrote itself.

When the speaker thought about herself, she had no idea what to say. When she thought about the audience, she realised that she had all sorts of fascinating and insightful experiences to share that they would enjoy.

Having a conversation with the audience is really what it is all about. If you were speaking to one person you’d moderate what you said to engage and hold their interest. An audience is no different, and while there is some truth in the line about not being able to please all of the people all of the time, putting their needs first takes you a long way down that road.

We’ll be looking at our other Golden Principles in the next few weeks. Meanwhile, the book that shows you how they work in real-world situations is still available at Amazon.